Bude RFC played its first match against HMS. Raleigh at Devonport in January 1966 with a team consisting mainly of schoolboys from the secondary schools: the club did not have any ‘home’ facilities. 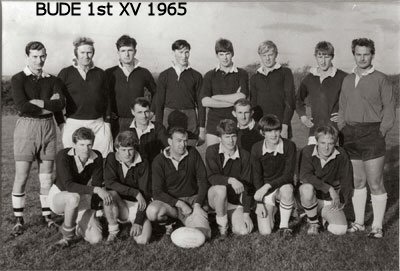 At the start of the 1966-67 season, temporary use of the land for the proposed Comprehensive School was obtained: changing facilities were limited to the Surf Life Saving Club and players’ homes with refreshments taken at local hostelries. More players were attracted such that the club could now field Senior and Colts teams.

Bude RFC. moved to a new venue in 1967-68 when work started on the Comprehensive School, where a large hut was erected for a clubhouse.

Unfortunately, this did not become the club’s permanent home, as the land was again needed for development. In 1983 and after two further moves, land belonging to North Cornwall District Council on Bencoolen Meadows became available: its level was raised by infilling to prevent flooding from the river. Bude Rotary Club as their Queen’s Silver Jubilee Project did much of this work with a clubhouse being built by club members in 1985.

The security of a permanent home resulted in a significant growth in player numbers and a second pitch was soon needed.  In1989, the club purchased land with the help of the Blanchminster Trust, close to the main pitch, to develop as another playing area.

Many players from Bude RFC have achieved Cornwall County honours in different age groups, whilst others have moved to gain Senior County recognition. Bude can boast of two internationals at U16 level: James Button and Phil Vickery. Phil continued his career at Redruth where he obtained Colts and U21 recognition before moving to Gloucester, from where he represented England and the British Lions.

Since the introduction of league rugby, our 1st XV has fluctuated between Cornwall 1 (Tier 9 in the RFU league pyramid), Cornwall/Devon (Tier 8) and Western Counties West (Tier 7) leagues.

On two occasions, 1995-96 and 2001-02, Bude was awarded the Alan Barbery Cup for the best league performance by a Cornish Club.